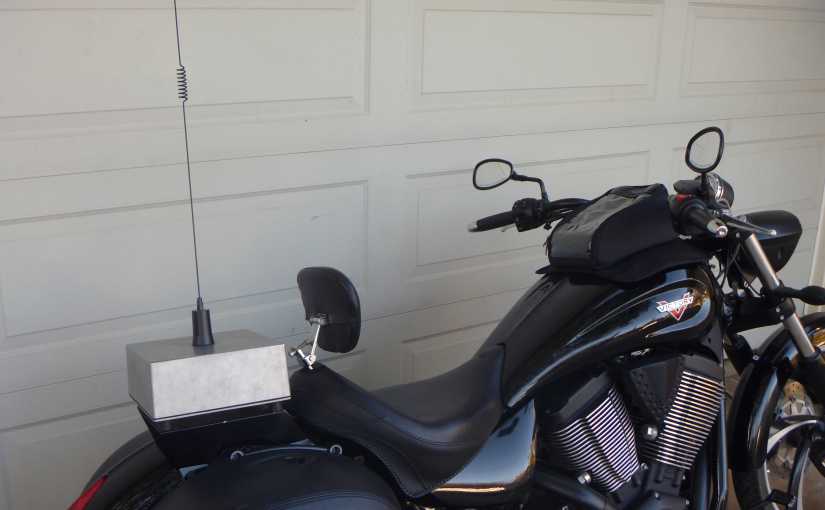 I have a 2m/440 mobile radio on my Victory Vegas. I enjoy using it for public service at athletic events and chatting with my riding companions.

The radio rides behind the saddle. To mate with existing bolt holes in the rear subframe, I made a model bracket out of aluminum flashing, translated that to a working drawing and paid a local metal shop to fabricate it from sheet steel. The bracket is connected by four rubber vibration isolators to a watertight aluminum project box, mounted upside down with the radio inside and a whip antenna on top. The radio control head rides up front in a tank bag, with a Sena SR10 and a homemade adapter. The Sena PTT button is under my left thumb, and I have a Sena 20S headset in my helmet. The headset communicates via Bluetooth, so there are no wires to forget to unplug when I dismount.

The adapter in the tank bag isolates the mic ground of the Icom IC-2730A radio from the Sena SR10’s single ground for mic and PTT. It also contains a speaker and a mic socket, so I can operate when stationary without wearing my helmet. The adapter connects to the Sena SR10 via Sena’s cable for a Baofeng or Kenwood HT. (I use the same cable with a Baofeng HT, when on foot.)

Since MARC warned me about antenna breakage, I chose a Pulse/Larsen NMO2/70B whip, whose middle coil is formed from the whip rod. It has held up so far. But the first time I took the rig on a long ride, I arrived with no whip! Vibration loosened the set screws that fasten it to the base coil, and the whole whip bounced out. It’s somewhere in Oakland, I guess. I replaced the whip and put Loctite on the set screws, and I haven’t lost the second one yet!

a guy with a computer, a radio, and a camera View all posts by af6fb