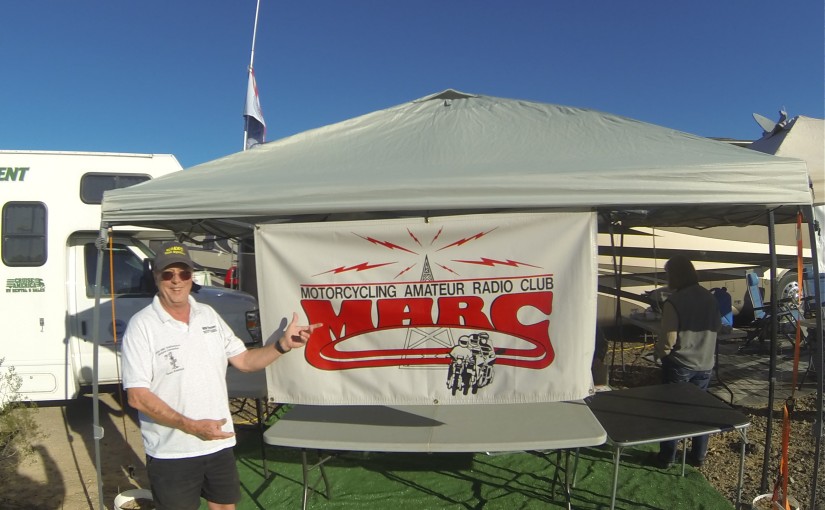 Quartzfest 2019 was a huge success. Over 1100 people attended the 7-day event. I rented an RV and parked next to Steve K6UFX (President) of the WIN-System. I put the MARC banner on one of our Easy-Ups. We served over 65 gallons of free coffee over the week, all provided by the WIN-System. The coffee attracted people at all times, sunrise to way into the night, every day. We brought the side-by-side off-road vehicle. This was a lot of fun, gave a lot of hair-raising off-road rides including Suzzy, Gordo’s wife. Only had to stop for one rider to lose their lunch. My job was complete.

On Friday, Gordo came to the MARC tent asking if he could use our Easy-Ups, chairs and tables for people that signed up for testing. Gordo said that his easy-up’s had blown away in 30 MPH winds the day before (Probably down around Yuma by then). I said sure not a problem. At the time of testing thirty-eight people showed up for testing. We had an issue of not enough easy-ups, tables, or chairs. We moved the coffee pots and got more tables and chairs. We took up so much space that we had to move some out into the road. We were positioned right next to the registration table…huge exposure for the MARC group. I gave out 25 cards to serious people as I had a limited supply. For Yuma we are planning on a brochure to hand out to those that are interested. Next year it would be a big help if there were people to help man the booth. Four to six people would be a big help.

a guy with a computer, a radio, and a camera View all posts by af6fb